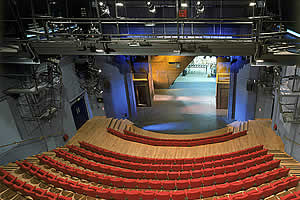 I went back to the school in London where I studied to become a drama teacher a few days ago.  I sat and listened to the Head of Acting at Central School of Speech and Drama give a lecture on 'How to get into drama school'.  It was extremely interesting and also confirmed a great deal of my own views and the things I teach my own students.

The main elements were as follows:

Don't lie on your UCAS form
Make sure you read the whole play
Look towards the auditioner when you do your speech
Try not to move around too much
Don't bring props
Read the broadsheets
Do unusual things with your time
Wear casual easy to work in clothes
The Head of Acting ended with these two points which were really important,
We don't look at your UCAS form until at least the second interview - usually the third

Now this got me thinking - I know potential actors need to get used to rejection, but some of these kids who are auditioning are 17/18, they are young and vunerable  and we need to nurture them and not destroy them or their dreams.


People want to be actors for all sorts of different reasons - often to be famous - a huge proportion of young people give this reason; in a world where celebrity is celebrated and pasted all over the newspapers - it is not surprising. Others want to be actors because "I can get paid for playing', or because it is a fundamental need within them. In these last two cases fame will not be the driving force.

However, we can encourage them to find out about all the different aspects of stage and screen - acting is only one job.

Stage Management is an underrated job - but it can be one of the most exciting jobs in theatre - once the show is on you are in charge! The technical jobs in theatre of costume, set design, sound, make up and lighting are as important to the overall look, sound and feel of a production as any other part.

I suggest when we are teaching our students - everyone is celebrated, whatever role they take in the creation of theatre
Posted by Theatresaurus at 03:41 No comments:

Best way to learn Shakespeare is to DO it! 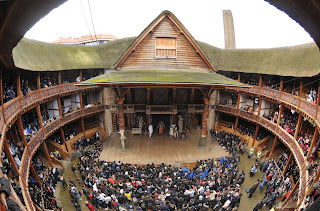 I believe that the best way to learn Shakespeare is to DO Shakespeare. We are all  experts at 'playing', so if a child is given a role to play, they use their imagination, inventiveness and their natural playfulness to bring the character to life - helping them to develop greater self esteem and confidence along the way.

I run courses and workshops using practical techinques to bring Shakespeare's work to life.  Having spent hours sitting trying to read Shakespeare as a youngster, being bored to tears by it and never getting it - I feel strongly that we shouldn't let this happen to our children

My oldest son was 13 when he phoned me while I was working on a project inspiring kids and working practically on Merchant of Venice.  His message said 'Isn't Merchant of Venice boring' - When I returned home I challenged him and asked him why he thought this was the case.  "We sat and watched some really old video for hours in our English lesson today", he said.  - On further questioning I discovered that the teacher had plonked them in front of the video without a word and expected them to 'get'it.

So how do we inspire kids to love Shakespeare?

A pre or post show workshop is useful - the RSC do some wonderful ones for all ages.

Most of all let them know that you love Shakespeare and they will admire your passion.

Posted by Theatresaurus at 08:51 No comments: 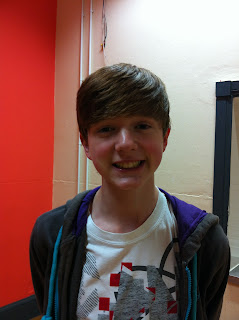 My name is Aaron, I'm 13 years old and I am a student at Theatresaurus. Going to Theatresaurus every week has made me a much happier person for all kinds of diffrent reasons. I go in with huge exitement every week and know I'll have an amazing time and I'll learn something new by the end of the lesson.


When I first joined Theatresaurus I didn't know anyone and quickly had to learn how to meet new people. Now I've  made great friends with everyone who goes there and can't imagine the thought of not knowing them.


At Theatresaurus when we first arrive, we start with a warm up game that gets us ready for the lesson. Then we'll do a starter activity that will teach us something or will improve our acting techniques. Then we start the main activity. This is the longest activity we do and it can be a few things like for example looking at a script and how the charecters in it behave, maybe even improvise from the script in the characters. The most common thing we do for the main activity is receive a brief, theme, sentence or situation and then make an improvisation from it in groups.


I have always wanted to be an actor and Theatresaurus has prepared me like nothing else has. It has inspired me and taught me principals of acting and techniques that will help me in the future. If any young person loves acting, then I would seriously suggest you join Theatresaurus!

Posted by Theatresaurus at 03:44 No comments:

Speech & Drama can help at interviews 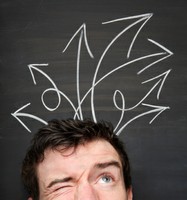 I had the experience of going with my first son to an interview for university this week.  He had only applied to one place - he said it was the only  place that did exactly what he wanted!  So huge pressure and huge competition on all of us but particularly him.  When we drove to the university, I could feel his nerves; he was pale and quiet and felt sick.  So it made me think how can Speech and Drama help with interview nerves?

Here are my five top tips:

1  Relaxation.  Part and parcel of Speech and Drama is relaxation.  We teach our students about the voice and how it works.  Part of this is relaxing and learning to breath deeply.  This is a brilliant tool for calming nerves.  Learning to relax, having it as something which you can switch on when needed is an invaluable tool

2. Feeling comfortable speaking with an adult in a one to one environment.  We are rarely in this type of formal situation as young people.  Our work is often in groups and we are usually tested by written test. In any speech and drama exam we teach children how to answer questions, even answering them in character and they learn how to answer fully and with confidence.

3. Using our imagination to understand how others feel and how we come across.  Often, students who are shy or slightly unconfident will find working on speeches and 'becoming' someone else helps them to understand what reactions to different behaviors can be.   They can learn how to LOOK confident through pretending to be someone else.

4. Part of the Speech and Drama exam is a discussion with the examiner.  We can prepare for this by looking at the subject and reading around it, having mock discussions and practising for the unknown.  This simulates an interview in a safe and reassuring environment.

5. Improvisation. In the later grades young people as asked to improvise with only a few minutes preparation time.  They learn to think on their feet, organise their thoughts and take risks. Some of these improvisations can be in groups and again if they go to any places which ask for group interviews or workshops this preparation will be invaluable to them.

Take  the plunge - email me for recomendations....
Posted by Theatresaurus at 04:46 No comments: