Be not afraid of greatness 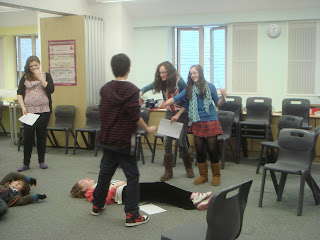 How difficult is it for each of us to admit we are good at something? How often do you take a compliment and really appreciate it or do you become bashful and say, "no it's not true" or "it wasnt much"?

A role play centres on putting your self into different situations, as a different character or as yourself and allows you to  act out the situation and change things. It can prepare you for something such as an interview with your boss or talking to your mum and dad or it can help work through some of the emotions involved in situations.

Working together in a group and taking risks in performance gives you confidence and can enable real compliments to be taken on board. It is up to the person running the workshop or lesson to instil confidence and make the space safe.  People can hold back but if they feel safe will start to get involved and join in, some dont say anything for some time  but gain confidence from being involved in something creative and good. Confidence can also be gained from working with a group of people on ideas in a protected environment where nothing is expected apart from bringing your own unique contribution and where you are not being assessed or critiqued.  Time and again we then see that people will start to put themselves forward and join in once they feel safe and part of something creative.

Improvisation is of course not just about an audience. In a drama club for example we build our skills and create confidence in young people from 11-14 and the audience is the people in the club so that it is safe and secure. We are not practicing for a show or assessment and we are usually being creative for a known audience of people we work with.

As an example of how this works I work with a 14 year old girl who had very little confidence and was struggling with all her academic work and every aspect of her communication with people. Working one to one and at drama club she is becoming a different person with increased confidence and her parents say that she has an opinion which she is now offering up voluntarily and even walks and speaks differently. A lot of what we have done is to incorporate her within a kind and protective group and allow her to be shy and also to join in without commenting on whether or not she is doing the right thing or how many marks she has got oout of ten.

Within the context of a drama club over time emergent themes recur. For example young people will become aware of their sexuality and gender differences between 11 and 14 and drama is a nurturing place for them to explore the world through improvisation and role play. It can stop the posturing and they can become somebody who can forget that and look at other factors and meet people from the other sex in a protected environment.

So be not afraid of greatness and learn to take compliments and understand your personal strengths within a safe environment, that of a drama group.


Posted by Theatresaurus at 03:58 No comments:

Hath not a Jew eyes? 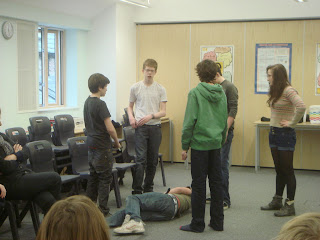 Dealing with bullying and stereotyping in the young can be tricky. If it is left unchecked however it can turn into much uglier behaviour as we are see with racist murders like that of  Stephen Lawrence.

Every year children who are bullied suffer some so much that they take their own lives. Simply telling young people to stop is not enough and much ca be done by using drama. We have already discussed the benefits of role play and alongside that work on scripts can really bring things to light in a safe and secure environment.

In one of the workshops we run we use a technique from Forum Theatre where the young people can choose a different ending to the one in the play and can use the ending in the script as a springboard to discuss how they might change things with people like teachers, their peers and their parents, making different choices and behaving in different ways. We often use the play Mugged by Andrew Payne - a Shell Connections play for the National Theatre where one of the characters takes on the playground bullies who have taken a mobile phone and tries to get it back but gets stabbed in the process.

In our workshop we ask the young people (14-15 year olds) to imagine how things might have been different and what options there were apart from one of the group being bullied going and taking on the bullies by himself. We brainstorm ideas and act them out and then each group talks to the others about what other options there were. In this way ideas about how to tackle bullying are coming from the young people themselves and options can be discussed and acted out to imagine possibilities.

Other techniques using drama are also very worthwhile pursuing. Running a bullying workshop for 8 year olds we looked at a story about a girl bought up in a forest who is caught by a hunter who locks her up and makes her behave in certain ways. She escapes and the animals help her. We drew pictures of the story and improvised on different choices which the girl could have made. We also asked the children to look at the behaviour of the hunter and to think about why he did the things he did and what he might have done differently. With the girls we looked at how she could communicate her needs to the hunter and stand up to him.

In both these workshops for very different groups of young people we are letting them work things through rather than giving them the answers and invariably their creativity and ingenuity come up with things we have never considered no matter how many times we repeat the workshops each group is different. Tackling a big subject such as bullying through drama means that things can be discussed without so much emotion and that it can be taken out of the personal to protect the participants from having to disclose things they may not want to. If they do want to disclose it gives them a safe and secure vehicle to do it.


Posted by Theatresaurus at 03:56 No comments:

All the world's a stage 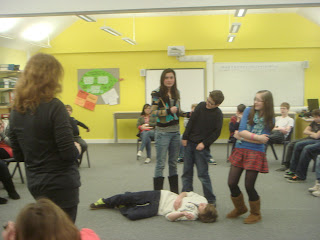 Why should anyone do drama as a priority?

What relevance is it to the competitive reality of today's world?

Many people see drama as irrelevant  - Many teachers and parents will relegate drama and theatre studies  to a hobby status especially during the enormous pressure of GCSE and A level work.

It was interesting to watch University challenge for graduates over Christmas to see how few of them had used their chosen degree to influence their current career path. All jobs require creativity , innovation, ingenuity and in particular adaptability and flexibility.  These skills are prized in business and commerce but where do young people learn these subjects?

How Does this work?

2. Drama improvisation allows young people to practice spontaneity and the right level of interaction - for example - when meeting a new boss.

3. In our fast moving world the people who succeed are those who can think quickly and intuitively and because drama is a team effort every individual learns generosity towards other peoples ideas.

4. Playing a range of roles can help people see things from different points of view and through working on a text participants are able to understand a multi dimensional experience of life.

5. Drama and theatre are fun but can also enhance diverse perspectives of learning and encourage different aspects of peoples personality and character.

6. Participants in drama and theatre workshops are learning to take risks and explore in a safe and supportive environment.  This can give young people greater confidence and a maturity which can filter into other areas of their lives.

7. Drama and theatre skills in education and the community cannot begin too early and our recommendation is that they are fully in place BEFORE any child goes to secondary school.

8. When young people come under the pressures of the exam system that is the very time that there should be more drama to help deal with the stresses imposed upon them. Drama sessions can be a way of relaxing and enabling them to switch off from the expectations of academic study.


What do you think? Has drama had an impact on your child's life?


Posted by Theatresaurus at 03:42 No comments: